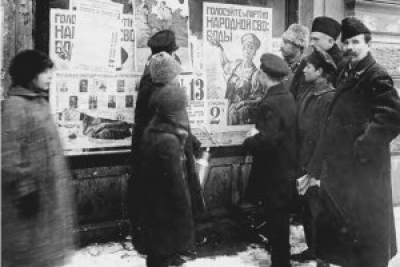 The Great Struggle to Escape Capitalism
by Bernard D’Mello

Petrograders examine campaign posters for elections to the Constituent Assembly. Jonathan Sanders Collection. (p. 67)
This article will be made available online on July 17.
Post-revolutionary societies, in their efforts to combat counterrevolution, have always been confronted with their own contradictions, and with the persistent threat that an exploiting class could reemerge. Instead of the intended socialization and democratization, in many places what resulted was instead state ownership and stultifying bureaucratization of both the economy and the polity.…