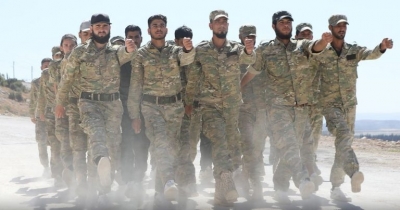 Turkey is recruiting Syrian militants to fight as mercenaries for the Azerbaijani Armed Forces against the Arminian military, Sham FM reported on July 18.

Citing sources with knowledge on the matter, the Syrian radio station said Turkish forces opened a recruitment center for that purpose in the occupied city of Afrin in northern Aleppo. Ankara is allegedly offering militants high salaries.

“[Turkey] wants to move the militants loyal to it to Azerbaijan to fight against the Arminian military in exchange for a renewable six-month contract with a monthly salary of $2,500,” a local source told Sham FM.

Other sources reported that the Turkish intelligence is now coordinating with al-Qaeda-affiliated Hay’at Tahrir al-Sham in Greater Idlib to assemble a special force unit that would be deployed in Azerbaijan. The 300-man strong unit will allegedly carry out special operations on the border with Armenia.

In the last few days, the Azerbaijani Armed Forces and the Armenian military engaged in a series of skirmishes. Twelve Azerbaijani service members and four Arminian soldiers have been killed on the border between the two countries.

Turkey, a historical ally of Azerbaijan, vowed to support Baku against Armenia. İsmail Demir, the head of Presidency of Turkey’s Defense Industries, said Ankara is ready to provide all types of assistance.

Last year, Turkey deployed thousands of Syrian militants in Libya to support its allies there. Syrian sources argue that Ankara may be planning to support Azerbaijan in a similar manner.