Communist Party of Armenia, The Armenian Genocide of 1914-23 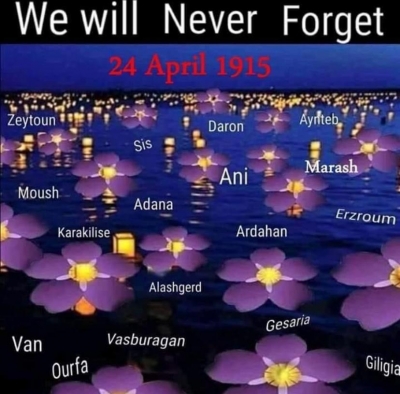 Acknowledging,recognising, and taking responsibility for the Genocide!

24th April 1915 marks the date upon which the Ottoman authorities in Istanbul (formerly Constantinople) began the roundup, arrest and forced deportation of leading Armenian figures from the city in what is widely regarded the beginning of a campaign of genocide against the then Ottoman Empire’s minority Armenian community…  A campaign that was allowed to continue largely without restraint over the following several years, the reverberations of which are still keenly felt over a century later.

The forced expulsion and murder of Armenians from areas such as Kars, Van and Western Armenia - in the east of Anatolia - was classic divide and rule, and a naked last-ditch act of murderous aggression and imperialism by the ailing Ottoman Empire.  What took place - and was allowed to do so before the eyes of the world’s leading powers - has indelibly marked several subsequent generations of Armenians, with a far-flung diaspora across the world, as well as significantly shaping the psyches and identities in both contemporary Armenia and Turkey over the past 100 years.  The events of those years are also widely understood to have served as inspiration for the murderous campaigns undertaken by Nazi Germany decades later.  When asked how history would judge him on his treatment of the Jews, Adolf Hitler is quoted as having remarked, “Who now remembers the Armenians?”

Those Armenians who survived the genocide and remained in Anatolia did so through forced conversion to Islam and the adoption of a new identity or by going into hiding.  Despite the many years that have passed, and the long road since those times, Armenians remain unsafe in today’s Turkey and it is widely acknowledged that care must be taken with any expression - be it cultural, ethnic or political - that it does not go beyond the very real limits that still exist in the modern Turkish Republic.  The genocide was systematic and the hatred that fuelled it was also systematic…  A systematic hatred that has persisted right through to the present regime.  One need only cite the murder of prominent activist and journalist, Hrant Dink, in broad daylight outside his Istanbul office by a young fanatic who was later photographed smiling and posing alongside his police captors with a Turkish flag.

The undemocratic and inhumane nature of the Ottoman Empire right through to the present regime can be seen in its immediate form in the racism that continues to be perpetrated against Armenians, Kurds, Greeks and other ethnic minorities in Anatolia - and in its class form in the approach taken towards Turkey’s citizens as a whole.  The contradictions inherited from the days of the Ottoman empire and still very alive and manifest under the present regime in Turkey, call into doubt the ready assumptions made about the modernity of Turkey, - with a significant amount of the Turkish population remaining polarised on the issue of the Armenian Genocide.

As the Ottoman Empire worked towards its murderous onslaught against defenceless and innocent members of its population and from 1915, when its campaign got underway, international solidarity with the Armenian people was lacking to state the least.  It took the intervention of Soviet Russia in 1920, and its acting as guarantor of the future integrity of the Armenian Republic, to finally ward off Turkey and the other forces attacking and menacing the Armenian people.However, recognising the Armenian Genocide and standing in solidarity with the Armenian people, and condemnation of the act so as to make sure it never takes place again, is a duty of all progressives around the world - indeed, the whole of the international community.

We call on the communist and workers parties around the world to stand in solidarity with the people of Armenia, the working class and its trade unions in Armenia, and the Communist Party of Armenia in their struggle to rebuild and work towards a safe, peaceful and progressive future for the country.

The Communist Party of Armenia